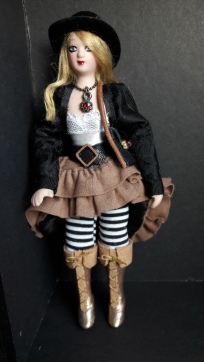 Hi, I’m Ruby.  They’ve asked me to explain to you what steampunk is, because loads of people are like, ‘What’s that?’

Well don’t be put off by the long words (‘cos I learned them specially, lol) but it’s a kind of retro-futurism.  Yeah, I know.  Took me a while to get my head around it, but there’s these old stories that were written like years and years ago, by Victorians and that.  HG Wells and Jules Verne and people.  And although they’re set in those times, they’re about the future – things like exploring to the centre of the earth or time travel and cool stuff like that.

Well some modern people thought it would be fun to imagine a world like those old people wrote about was really coming true.  It’s as if time took a different turn and instead of us getting into nuclear power and smart phones and everything, people had found clever ways to use the olden days technology like steam and clockwork.  I think it’s dead cool. 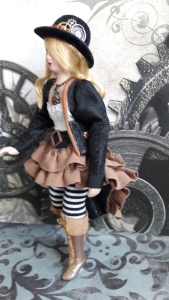 Those old stories I was talking about, yeah?  Well they had all sorts of terrifying monsters and stuff that the heroes had to battle against with their amazing steam-powered weapons, so steampunk is into that, too.  Loads of the guys go and buy nerf guns and do them up so they’re metallic and look really awesome, to protect themselves against all the evil stuff.  I know – bit weird – but boys and their toys, y’know?

Steampunk isn’t much like real Victorians, because they were quite dodgy really – no women’s rights and like exploiting the working classes and anyone who wasn’t British.  We learned about them in history.  So steampunk people have a motto about being splendid to everyone.  We kind of take the best of Victorians (like how good they were at inventing and building awesome machines and everything) and ignore all the bad bits.

I got into it when I read Northern Lights.  That’s by Philip Pullman and it’s what The Golden Compass film is based on, but I liked the book better.  And now there are loads of good steampunk writers about and we have conventions and festivals and balls and everything.  You might want to try reading stories by Nimue Brown or Phoebe Darqueling or go to some blogs like The Curious Adventures of Messrs Smith and Skarry or Cogpunk Steamscribe.

Anyhow, got to rush.  I’m off to a steampunk fair with Charles.  His costume looks awesome.  Oh, and if you want to check up on some of the others, go to The Steampunk Dolls House.  I might join them there sometime.