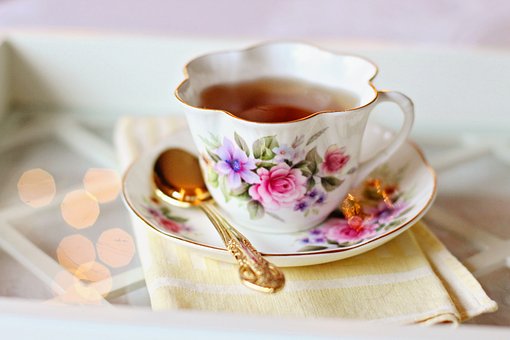 It all started with tea.  Hardly surprising – our little hive of fairly pointless but hugely enjoyable industry runs largely on tea most of the time.  Not, I hasten to add, the sweetened, milk-infested mud-brown builders’ variety.  We are partial to fascinating infusions – green, white, herbal – with interesting combinations of subtle flavours.  When pressed to drink black tea, a little Earl Grey, or better yet Lady Grey (the citrus blends so well with the bergamot) is acceptable.  Without milk, obviously.

Imagine, then, our total delight when a visitor to Steampunk-Shrunk Towers arrived bearing the most delectable of gifts: a clear acrylic box containing small cardboard pyramids, each containing a different variety of tea.  Such a thoughtful present.  Mrs S positively purred with delight.

For the next week or two we sipped all manner of enticing blends.  (Some a little more enticing than others, it must be said; rooibos combined with chocolate and vanilla is something of an acquired taste, I feel, although green and pomegranate was an unexpected delight.)  As the tea was consumed, the little card pyramids were carefully placed on one of the few remaining clear horizontal surfaces while we waited for their next incarnation to become apparent.

We are – as many readers will know – purveyors of upcycled items.  We pride ourselves on reusing what many would consider waste to create new objects of desire.  These tiny containers clearly had some wonderful incipient purpose.  It was our role to discover it and make the transformation.  Pondering possibilities, teacup in hand, is one of our major tasks.

“Church spires?” ventured Madame Ava Brassfeather.  “A sort of city of spires, perhaps.”
Hugo Fforbes nodded. “Or maybe roofs on turrets – a gothic mansion or two with clocks and flagpoles.”
“Clock towers, yes, could work…” muttered Henry, thoughtfully.
“They’d be too small for us to fit inside,” Gina pointed out.

Gina is a young American girl, lodging with us temporarily whilst awaiting her father’s arrival (when Mrs S gets around to creating him).  She was right, of course.  But as Lady Cristabel pointed out, in a miniature retro-futurist world, size – like time – is distinctly relative.

More tea was imbibed, more empty boxes found, and interesting paint or paper applied to every surface.  That clear plastic box in which the tea bags had arrived was pressed into service to make arched windows.  Curtain rings, cocktail sticks, drinking straws and various beads were gathered.  The extensive stash of adhesive tapes – metallic, decorative, double-sided – was raided.  Gradually a rather wonky, rust-toned, multi-towered building emerged.

The town hall of our new urban development was judged a success.  Soon more buildings followed and before we knew it, the town of Clockton-upon-Teas started to form.

The structures, being made of lightweight card and plastic, are easily manoeuvered around, even by 6 inch tall artisans.  Thus the town changes rapidly and frequently.  If I’m brutally honest, I have to admit that we have become rather obsessed with creating this delightful, clock-infested borough.

What will become of it?  Mrs S is planning to take Clockton along to the Best of Somerset Show in the City of Wells later this month.  If any parts of it remain, they may find their way to the deliciously quirky Magpie Vintage shop in Midsommer Norton, or even our Etsy shop – the SteampunkDollsHouse.