Henry stared blankly at Charles.  “You lost me somewhere around the taxi,” he admitted.

Charles grinned.  “So you understood the ornithological part?”

“Yes – birds, and I can SEE they are birds of various kinds.  Nicely mounted, too. I like the glass cases. Kindly explain the rest of the title.”

“Taxi- means to organise or put in order,” Charles responded. “You are familiar with taxidermy, no doubt?”

“So taxidermy is, etymologically speaking, the art of organising a deceased creature’s skin (that’s the dermy part) to make it look lifelike by – yes – stuffing it carefully, adding glass eyes and whatnot.  Well I haven’t used the skins of dead birds for my process.  I’ve used watch parts, which is the chrono, and a substance known as polymer clay, which you brought back from one of your time-travel excursions to the twentieth century.  I decided polymy would be a suitable term for that. Simple really.”

“Hmm, if you happen to have eaten a dictionary,” observed Henry. “It doesn’t exactly slip off the tongue, though, does it?  Surely you need a simpler name if you’re planning to market these handsome creatures.  Steam Birds, for instance.”

“STEAM birds?” spluttered Charles. “Where the devil is the logic in that? They don’t relate to steam in any way.  They merely sit in their cases and look decorative.”

Henry paused for a moment, looking pensive. Then a large smile crossed his face.
“Yes,” he said, firmly. “It stands for Small Technical Experimental Avian Models.  Avian refers to birds, Charles, as I’m sure you know.”

Charles regarded him for a moment, then erupted into peals of laughter.
“Touché, old chap!  Most ingenious!  Very well, then – STEAM Birds they will be.”

If you are planning to visit any of our forthcoming Steampunk-Shrunk sales (see home page for details) in the next few months, you will be able to see and perhaps buy one of Charles’ ingenious little birds, such as the Crested Red-backed Cogfinch shown here.

George Entwhistle, a patents clerk by day, had always enjoyed tinkering.  The trouble was, tinkering could be a somewhat noisy activity.  Living as he did in a terraced property, he had to contend with frequent complaints from neighbours and visits from members of the constabulary.

In consequence, he’d been banned from hammering, sawing, welding or producing anything with a tendency to explode between the hours of 8pm and 10am, and all day on Sundays.  This, given the long hours he worked at the patents office, made it difficult for him to achieve anything of note.  George felt cheated by life.

All this changed, though, the day he realised that the blocked up door in the sitting room did not, as he’d always imagined, lead to the parlour.  Careful measuring and still more careful (and virtually silent) plan drawing showed that there was a two and a half foot gap between the blocked door and the parlour wall.

Working only between the hours of 7.30 and 8 in the evening, George carefully prised open the mysterious door and discovered, to his great amazement, a staircase leading down.  Eagerly, he availed himself of an oil lamp and the poker from the fireplace, and cautiously descended. 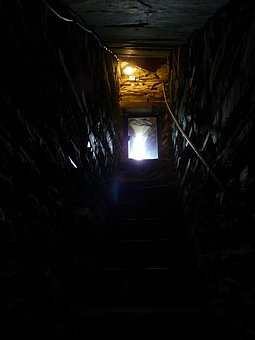 Imagine George’s surprise and delight as he discovered a further door at the base, which opened quite easily, revealing a large cellar!

Certainly it was cold and uninviting, but the walls were thick.  George raced upstairs, grabbed his noisiest intruder alarm – one of his most unpopular inventions amongst the neighbours during the testing stage – and took it down to his newly discovered domain.  Here he set it off and left it in the cellar, shutting the door behind him and returning to the sitting room.  Despite the deafening clang of bells and shriek of whistles echoing around the empty space below, there was virtually no sound to be heard from either the sitting room or parlour.  Despite it being 8.30, not a single neighbour banged on the wall or hammered on his front door.
“Eureka!” exclaimed George.
“Quiet in there or I’ll summon a constable!” came an angry shout from the occupant of number 28.

From that day onward, George worked to transform the cellar into a tinker’s workshop.  He extended the heating pipes downwards to power a boiler, which not only heated the workshop, but allowed him to brew a much-needed cup of tea from time to time.  He constructed a doorbell with a wire connecting it to the front of his house, so that callers could be heard.  He made himself a shelf and workbench and even installed a clock and mirror.  The result was a commodious and most agreeable work space.  George was a happy man.

He is currently busying himself with constructing a clockwork time machine.  He’d long had a plan, gleaned from a combination of the failed ideas of several other tinkers.  Working in a patents office did have certain advantages.

As you can see, his contraption is well underway, and he’s able to fire it up for short periods.

“Only a matter of time,” George mutters to himself, smiling slightly at his own wit, “Now that I no longer have to suffer time restraints, soon I shall be the master of time!”

Should you wish to inspect George’s cellar workshop and the items he is creating there, do come to any of the Steampunk-Shrunk stalls at various events over the coming months.

The details of venues, dates and times can be found on the home page of this website.

Oh, and if you come along, do ask George to demonstrate the time machine.  He loves to show off his workmanship.

It was, not surprisingly, young Molly who found the book first.  She’d read her way through everything in the Steampunk-Shrunk library  – even the Suffragette newspapers – and had been on the lookout for something new.

“Excuse me, Lady Cholmondeley,” she said, dropping a pretty curtsy to Josephine, “But do you think your husband, seeing as how he’s the Lord Admiral of the High Fleet, could take me on one of his sky ship machines to Brasston?  They’ve got a perfectly splendid aerodrome and I’m sure they’d allow him to dock there.  Let me show you the pictures.  They’re in colour!”
“Why I’ve never heard of the place, my dear. Are you sure you’ve got the name correct?” smiled Josephine.
“Oh yes, Your Ladyship, Ma’am. I think it must be very famous. It won the ‘Most Cosmopolitan City Award’ in 1850.”

Josephine started to look through the book – a most difficult process since, unlike the inhabitants of Shrunk Towers, this book had not been shrunk to one twelfth of its original size.  She had to obtain assistance from several other members of the community and they in turn became mesmerised by the splendours of Brasston.

“Good lord!” Barnaby Balsover exclaimed, “There’s a chap there having his shoes polished by a clockwork automaton!  Quite remarkable!”
“Certainly,” agreed Ava Brassfeather, “And it says they do tours of the clock factory and provide cake and tea.”
“I believe it says you have to pay extra for cups and saucers, though, Ma’am,” Molly whispered, jumping in alarm when Ava made a loud tutting sound.
Molly wasn’t sure whether this was aimed at herself or the facilities available at the works, but she didn’t venture to speak again.

When Algernon returned from a successful raid on a troublesome bunch of sky pirates who had been terrorising the airways above Penge, he was met by a mass of pleading faces.
His wife took his arm, gazed alluringly into his eyes and purred, “My dearest…”

“Hmm,” he said finally, once he’d had a strong cup of gunpowder tea and an opportunity to peruse the book.  “I strongly suspect that this is a work of fiction, created by this rather splendid gentleman on the back cover, Mr Ashley G.K. Miller.  I’m not convinced that the city exists.”

“Well if anyone can find it, it’s you, Old Boy,”  announced Lord Horatio Backgammon, and the others joined in a chorus of agreement with his Lordship’s sentiment.

And so, as I write, the entire group is busy packing and preparing for an epic journey in one of the fleet’s most capacious dirigibles, while Algy is earnestly poring over his charts, in search of the city of Brasston.

Should you wish to discover this remarkable location for yourself, dear reader, I suggest visiting Mr Miller’s Facebook page, where you will find all the details you need.