The two terms don’t sit particularly comfortably together, I feel.  As I pondered the possibility of adding seasonal items to Steampunk-Shrunk’s stock for the upcoming Christmas sales, images of rusty Santas and welded junk Christmas trees felt less than inspiring.

I’d more or less given up, when I opened a draw and found some of these little creatures, bought in last year’s January sales, peering hopefully up at me.

There was already a box of vintage watch parts sitting on the desk, and the two seemed to fit together perfectly.

So now there are some steampunked reindeer, some with tiny cogs for eyes, while others have real (industrial grade) rubies – Rudolph the red-eyed reindeer?

By now some modicum of Christmas spirit was seeping into my veins and I started hunting around the studio for other items that could be combined to create something festive.
“How would one decorate a steampunk Christmas tree?” I asked myself.

Idly I began twisting wire around needles to form coils and threading them with whatever came to hand – vintage beads from an old necklace, cog wheels and watch parts, bells, charms and even miniature teapots.

The copper coils were bent and twisted at crazy angles and the weird, dangling objects that emerged were hung from lengths of ribbon.

Who can say whether others will share my concept of a steampunk Christmas?  Time will tell.

These One Of A Kind oddities will be on display at the two December stalls where Steampunk-Shrunk is exhibiting.  See home page on this site for details of dates, times and venues.

Sometimes we like to push ourselves a bit – yes?

So I was staring at this gorgeous picture on Instagram – yes, this one here – and thinking how much I’d like to create something like it.  Now I don’t have a soldering iron or any other metal-working skills or equipment.  My woodworking ability stops at cutting up coffee stirrers and lolly sticks with a junior hacksaw.  In fact, I’m strictly a glue-and-cardboard person if I need to make anything rigid.  It didn’t look particularly hopeful.

Then I remembered that I had a couple of cheap 1:12 scale metal prams.  I put them next to the photo and decided the larger one might just work.  Well, it was worth a try.

First there was much measuring, pattern cutting and trial and error with some nice brown card I had lying about.  Next each piece was lined with card-backed fabric in a subdued floral pattern and the centre part of the body was glued in place.  It looked roughly the right shape.

Putting together the dashboard, steering wheel and brake was easy, as was the little padded leather seat.  My horseless carriage was coming together.

If it was going to be horseless, it needed an alternative power source.  Steam – obviously.  I cobbled together a little steam engine to go on the front and used a drinking straw covered in copper tape for the funnel.

It was at around this point that the vehicle’s name came to me.  In Shakespeare’s A Winter’s Tale, there’s a character called Autolycus.  He describes himself as ‘A snapper-up of unconsidered trifles’ and that is exactly what this vehicle was becoming.  A spring from a ballpoint pen, the stick from a cotton bud, several small rubber washers, along with beads, chains, charms and jump rings from my junk jewellery collection all went into it.  So The Autolycus it would be.

The boot was turned into a strong box, with tiny nail art crystals for the rivets.  The windows were cut from clear acrylic packaging and set into suede strip seals.

Finally – and very nervously – I put the whole body together.  A couple of coats of clear gloss acrylic varnish gave it look not too unlike polished wood, and strips of leather thong worked well for trims.  The roof frame was – obviously – made from coffee stirrers!  The door was attached with a strip of cotton tape and some faux hinges made of beads stuck to the outside.  More beads and some earring wires made a pair of suitably ancient-looking lamps and at last The Autolycus was finished.

Obviously it lacks the beautiful clean lines of the vehicle that inspired it, but I’m not unhappy with the overall result and I’m sure the ladies and gents at Steampunk-Shrunk will be rather interested in this strange vehicle, despite the fact that it’s the steampunk equivalent of a smart car and only the skinniest and most agile contortionist would be able to get inside and steer the thing.

The Autolycus will be on display at various Steampunk days and miniature fairs in the New Year.  Check the home page on this site for details of dates and venues.

A complete change from steampunk, and a huge challenge… but a friend commissioned me to put Shakespeare’s Globe Theatre into one of my little cardboard cases.

To begin with I just gawped at her, but she had it all figured out.  The audience would go on the back wall, there would be some Tudor theatregoers in boxes to the sides of the stage and the fold-down tray of the case would provide the stage itself.
“I’d like a scene from A Midsummer Night’s Dream,” she said. “Titania in her bower, with Bottom wearing his ass’s head and Puck nearby.

My first impulse was to run screaming from the house, but gradually I began to see it emerging in my mind’s eye and once that happens, I start making. 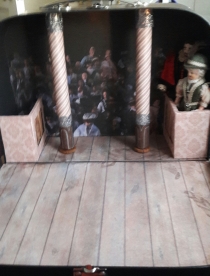 So here is the basic box layout.  All my spare miniature people – the ones awaiting transformation – had to dress as extras and be photographed many times to make the audience backdrop!

And here is a wealthy member of the audience.  One of Mr Shakespeare’s patrons, perhaps.  He certainly has one of the finest seats in the house.

Titania’s bower is a mix of wire and artificial flowers, with velvet cushions the colour of moss and grass.  The fairy queen herself has glittering wings, a floaty silver and translucent dress, a crown of opals and rose gold chains and long golden hair. 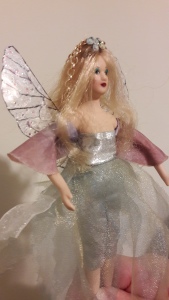 The portly Bottom, by contrast, wears rough hessian clothes, as befits a ‘rude mechanical’.  His donkey head is removable.  To be honest, I think he looks better with it on!

Finally Puck – my favourite – has cropped green hair and feather wings.  He carries the purple herb he used to bewitch Titania, who is now hopelessly enamoured of the ‘translated’ Bottom.

There’s a little more to do – some scenery to depict the woodland and another gentleman to watch the play, but this – roughly – is how it will look.

Not entirely sure how this will end up, but it's going to be an astrologium. (No, I've never heard of them either, but such details never bother us 😁)
Chocks away! Ginger here is flying off to the USA today with a consignment of mini steampunk books. Bon voyage, Ginger.
These little wizard kits proved popular at our latest market stall.
All set up in Glastonbury Town Hall. Come on down!
People at the Craft Market kept asking whether my wax-sealed 'ancient' scrolls had anything written on them. They like authentic in these 'ere parts 😂 So now they do. Trying to keep the customer satisfied... Come and buy one at Glastonbury Town Hall on 14th May.
Some more Magnificent Magnification Devices for those who apparently struggle with reading our 12th scale books.