Greetings to all from the grey, damp and murky land of Avalon, where life, myth and mystery combine curiously amongst the swirling mists (well, actually thundering hail storms at the moment, but that’s a temporary glitch, I’m sure).

We felt the arrival of a new year merited an update on how things are progressing here at Steampunk-Shrunk HQ.  When I say ‘we’ I refer to myself – a slightly eccentric but mostly harmless white-haired writer-and-educator-turned-miniaturist – and the cluster of (far more eccentric) 1/12 scale figures who share this compact and slowly sinking residence.
Yes, it is indeed sinking. It used to be level with the road outside when it was built, a mere three-hundred-and-something years ago. Alas, it has failed to keep pace with the world around it and is now reached by stepping down from the pavement into our semi-subterranean world. It all adds to the general weirdness…

We are currently working alone, since the Steampunk Dolls’ House – our fellow enterprise based in Shropshire – almost sold out over Christmas and its few remaining residents are in the process of moving to new premises.  Nothing daunted, and buoyed up by moderate successes last year, we have decided to take to the road this year and flaunt our wares in far-flung areas of the United Kingdom.

Sadly, we possess only two vehicles between us, and both of those are at 1/12 scale.  Determined not to allow that to dissuade us, however, we have purchased a suitcase of gargantuan proportions and one of those magical devices for taking card payments from customers.  Many hours perusing bus and train timetables and hunting out bargain-priced accommodation means that we are about to commence our Grand Tour. 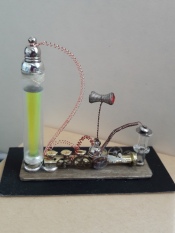 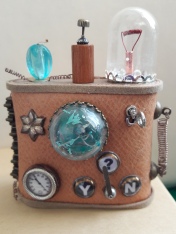 Messrs Crackington and Balsover are busily creating an emporium filled with a host of cunning contrivances and devious devices, which will be available for purchase at our forthcoming sales.

Some of their wonders, including the mysterious Oracular Device and the dangerous-looking Phosphorus Pump are displayed here. 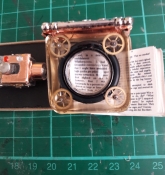 Over the next few weeks, we will be highlighting more of the delights you can expect to discover on the Steampunk-Shrunk stalls which will be appearing around the land.

Our first venue will be the Thame Miniatures Fair (in Oxfordshire) on Saturday 17th February,  followed by a weekend Steampunk Convention on March 24th and 25th in Shrewsbury, Shropshire.

We’d be delighted to meet you at one of these events and hope you’ll be able to join us. 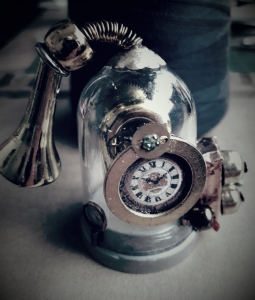 I, Ebenezer Crackington, am by trade a clockmaker.  I have worked at this trade since I completed my apprenticeship in the beautiful city of Paris, France, many years ago, at the age of twenty-two.

For eighteen years I made a reasonable living producing table and mantle clocks of the finest quality, encased in glass domes so that the mechanism could be viewed by the owners.

One memorable day, however, my shop was visited by none other than Lord Horatio Backgammon.

Imagine my amazement as this great gentleman entered the door and removed his hat, just as any lesser person might do.

I bowed to his lordship and offered him a chair, wishing that I had some upholstered seating, rather than the plain wooden variety.

Nevertheless, his lordship deigned to sit upon this humble piece of furniture with no complaint and addressed me in the following manner:
“Crackington,” he said, “You have been recommended to me by certain gentlemen at my club as being a first rate craftsman.  Would you say they are correct?”

No doubt my face reddened rather at this most unexpected compliment, but I kept my head and replied, “Why I certainly believe it to be the case, Your Lordship, judging by the testimonials I have received from satisfied customers.”

“Good show,” Lord Backgammon responded.  “In that case, I have a most particular commission for you.”

I promptly availed myself of a pen and my order book, hoping that my exterior appearance remained calm, despite my inner excitement.

Lord Horatio Backgammon informed me that, for reasons he was unable to disclose, he needed to wake and rise at a various times during the night in order to attend meetings of an extremely significant nature.  His prompt arrival at these rendezvous was of the utmost importance.

Unfortunately, his lordship was a very heavy sleeper and was having great difficulty waking on time.

He asked whether I had any experience in constructing adjustable mechanical alarm clocks.  I assured him that I had served as apprentice under M. Antoine Redier, the inventor and patent holder of such devices.

“Well they are useless!” his lordship informed me.  “I require a device at least ten times louder than such paltry machines and one which involves a further element of surprise.  Can you do it?”

I assured him that I could, and would start work on it that very day.

Lord Backgammon left his card and a generous down payment and departed. 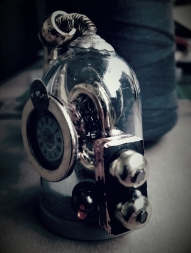 I commenced by using a double bell for the alarm mechanism, with a strong beater which alternated between the two.  I then constructed a large claxon, which I fashioned from a trombone horn, which moved about in a haphazard and suitably alarming fashion when activated. 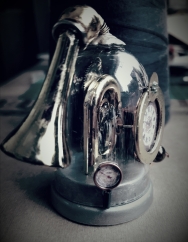 Since I was concerned that the ensuing noise might perforate his lordship’s eardrums, I installed a decibel gauge, which would shut down the alarm if dangerous sound levels were reached.

Lord Backgammon was delighted with his device and pronounced it satisfactory in every respect.

Thus I find myself the inventor of the Ebenezer Crackington Alarming Clock.

A miniature DIY book containing this text can be purchased as a downloadable file from our Etsy shop here.  The file contains mini pages, an illustrated cover and full instructions for putting the book together.  All this for just £2.64.