This is how Tobias looked when he first arrived at Shrunk Towers.  I think his name was probably Paul or Richard.

After a bit of Steampunk-Shrunk magic, he ended up looking like this – fine leather coat, hand-stitched black wool trousers, satin waistcoat, cravat and a serious facial makeover.

As they are transformed, the little people’s personalities change too.  Tobias oozes charisma, but he does like to call the tune.  That’s why I ended up with The Angel.

There’s a town I visit when I need to replenish my raw material supplies.  It’s the only town I know that has two large branches of Poundland in one street, with Wilko and a bunch of charity shops in between.  It’s that sort of town.  As all my raw materials are bargain-basement, other-people’s-idea-of-rubbish items, it’s the perfect place.

I’d barely started browsing, when I saw the car in a shop window.
“Buy it!” hissed Tobias.
“That?” I asked. “I mean it’s very lovely, and I can see it’s just your size, but look at the paintwork.  It’s dreadful – needs a load of work.  And I don’t DO cars.  And anyway, it isn’t cheap.”
“So haggle,” he replied calmly and insistently. “You can do it up.  It’ll look great.  Just imagine it as the centrepiece on one of your stalls with a driver in a leather coat and goggles…”

So, just to shut him up, I went in and asked what their best price would be.  They offered ten per cent off and – still doubting the wisdom of this – I bought it.

Gleefully, Tobias sat in the driving seat.  “I’ll call her The Angel,” he smiled.  “You won’t regret this, you know.” 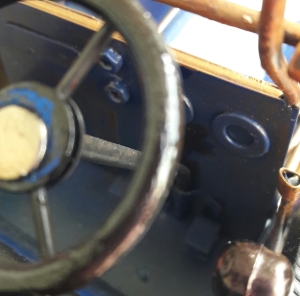 Every spare minute was given over to The Angel during the next three days.  Shiny gold and silver nail varnish covered the blotchy detail paintwork.  Gold cord trim made the upholstery look neater.

The dashboard (two metal washers, two tiny bolts and a strip of tin) was replaced by an array of dials, ‘lights’ and switches, a clock with cogs and a deep blue leather map pocket, complete with removable map.  The scrap jewellery box was raided to create headlamps (a pair of pearl earrings painted over with more nail varnish) and fog lamps.  My signature copper tape (sold as slug repellent) trimmed the details and was used to fix the clear acrylic windscreen in place.

Tobias declared himself satisfied with the result and, pulling down his goggles, climbed back into the driving seat for a photo-shoot.