This is a true story:

Many decades ago, a gentleman in England took the opportunity of purchasing the entire remaining stock of sets of clockwork parts for making automatons.  They had been manufactured back in the 1950s or 60s by a company in West Germany, for hobbyists to install into novelty cigar boxes.  As you opened the drawer to offer your guest a cigar, the bird on top would begin to trill merrily and to twist and twirl around.

Such hobbycraft (and indeed cigar boxes generally) had lost their popularity by the time our gentleman procured the parts, in the early 1980s.  He had grand plans to sell them on for other purposes, such as creating novelty Easter eggs, Christmas decorations and the like.

Alas, his grand plans came to nothing.  The boxes of shiny brass and steel mechanisms, with their complicated cams, tiny brass swanee whistles and miniscule rubber bellows were relegated to his attic, where they lay forgotten for many more years until, after his demise, his widow decided she wanted a clear-out. 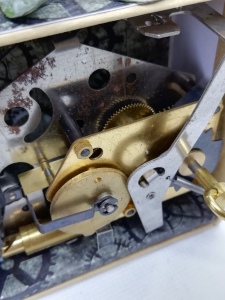 By now rust and verdigris coated the machines, many of the fragile plastic birds were chipped and the cardboard boxes they were kept in had been nibbled by many generations of mice.  It fell to the departed gentleman’s son to dispose of them, which he did by placing a small advert on a local noticeboard, where it was spotted by the eagle-eyed Mrs S.

Many were beyond repair, but others had stood the test of time.  Much cleaning and polishing ensued, along with long hours of experimentation to find ways of fitting the components together and allowing the birds to move and sing again.

Finally, some of the vintage automatons are working once more.  The birds (previously with rather grubby and unappealing red, white and blue painted plumage) have been given a steampunk makeover and fixed to some little boxes which rather neatly enclose the clockwork motors. 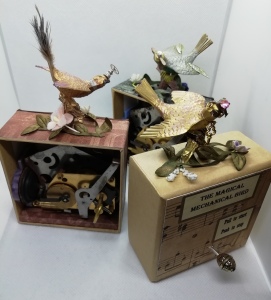 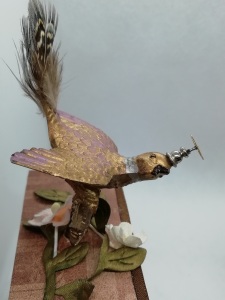 There are still pieces of rust and  the contraptions need to be handled with care, but a precious few have been tested and are for sale in the Steampunk Dolls House, on Etsy, while others will be available on the Steampunk-Shrunk stalls this coming spring and summer, such as the Shrewsbury Steampunk Spectacular. (See home page for dates and details).

Do come and buy one of these fascinating little automatons and you will own a small piece of history.