The two terms don’t sit particularly comfortably together, I feel.  As I pondered the possibility of adding seasonal items to Steampunk-Shrunk’s stock for the upcoming Christmas sales, images of rusty Santas and welded junk Christmas trees felt less than inspiring.

I’d more or less given up, when I opened a draw and found some of these little creatures, bought in last year’s January sales, peering hopefully up at me.

There was already a box of vintage watch parts sitting on the desk, and the two seemed to fit together perfectly. 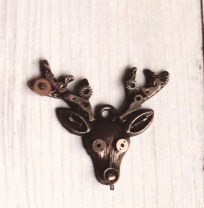 So now there are some steampunked reindeer, some with tiny cogs for eyes, while others have real (industrial grade) rubies – Rudolph the red-eyed reindeer?

By now some modicum of Christmas spirit was seeping into my veins and I started hunting around the studio for other items that could be combined to create something festive.
“How would one decorate a steampunk Christmas tree?” I asked myself.

Idly I began twisting wire around needles to form coils and threading them with whatever came to hand – vintage beads from an old necklace, cog wheels and watch parts, bells, charms and even miniature teapots. 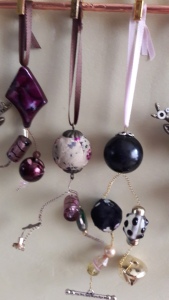 The copper coils were bent and twisted at crazy angles and the weird, dangling objects that emerged were hung from lengths of ribbon.

Who can say whether others will share my concept of a steampunk Christmas?  Time will tell.

These One Of A Kind oddities will be on display at the two December stalls where Steampunk-Shrunk is exhibiting.  See home page on this site for details of dates, times and venues.