Here is the second chapter of the story of Algy.  If you missed Chapter One, you can read it here.

This unfortunate circumstance was, as has previously been intimated, only the beginning of a set of events which seemed to go from bad to worse.

Algernon’s mother-in-law came down with a most tiresome condition, which seemed to involve a great deal of coughing – particularly during the small hours and after lunch – and it was decided that she would have to stay at the Grey House until she was well enough to return to London.

This lady had never been particularly well-disposed towards her son-in-law.  Now that her temper was rendered somewhat shorter, presumably by her malady and lack of sleep, she became quite vociferous in her criticism and complaints about him.

“Why ever didn’t you marry that boy from the East India Company, Josephine?” she would demand of her daughter.  “Much better prospects, I would have said.” or  “Oh my dear, are you still wearing that style?  Surely your husband could afford to buy you something a little less dated?” 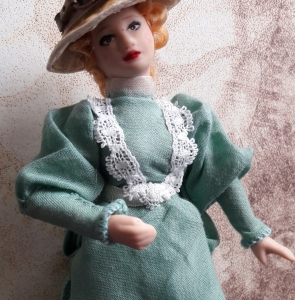 Josephine busied herself with bathing her mother’s forehead and preparing herbal concoctions to ease her cough, and looked endlessly miserable.

Algernon couldn’t decide whether this was because she secretly agreed with her mother and was now regretting her marriage or because her mother’s criticisms of her beloved husband distressed her severely, although she was unwilling to contradict her ailing parent.

He considered asking his wife which of these was the case, in order to calm his tormented mind, but – if truth be told – his mood was now so low that he strongly suspected that it was the former, and could not bring himself to have his worst fears confirmed.

In February – in fact on February 14th – the parlour maid and Algy’s favourite groom eloped together.  Algernon was furious at the inconvenience caused by this selfish action. Why should servants run off to enjoy a future together without a second thought for those they left behind?  Now he would have to find replacements for them and the new staff would need to be trained in how matters were conducted at the Grey House.

None of the aforementioned events could be called catastrophic, but together they created a most unhappy state of affairs for Algernon and he became extremely downhearted. He took to hiding away in his study for long hours and even chose to have his meals there on frequent occasions.
“Algy, dear, please don’t punish me so!” entreated Josephine.  “I know mother can be rather tiresome and I understand that you are not in the best of humours, but I do miss your company at dinner.”

Alas, Algernon was deaf to the pleadings of his beautiful wife.  He simply became more introspective and silent.

Harold the photographer is finished. However he's hinting that he's always dreamed of having his own photographic studio.
Harold's portable camera. I might make him one on a tripod too, for more formal occasions.
This is Harold, almost fully dressed. I think he will be a photographer.
Starting on a new mini person. Not sure yet whether he will have a beard.
There are 9 of the wristbands altogether. Each is a one-off design and handmade.
Another of the wristbands. Most have skulls and keys and other steampunk bits and bobs.