Here it is at last – the final part of Algernon’s story: 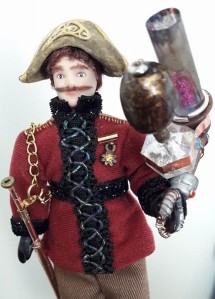 Algernon lifted his telescope to his eye and scanned the horizon.  Just one small smudge of grey over Middlesex.  It was high in the sky.  A less practised eye would have missed it altogether, or mistaken it for a wisp of cloud.

“Pirates at four o’clock,” he called.  “Prime the machine.”

Sure enough, as they moved closer, became clear – smoke belching from her filthy funnels.

“Machine’s primed and ready, Sah!” barked a voice from below decks.

“Good work, Mister Capon.  Keep tracking them.  I’m going to turn her around so they can’t see our profile.  Wait for the order to fire.”

Like the rest of the crew, Edwin Capon was proud to serve under Admiral Algernon Cholmondeley.  Their airship was the envy of the fleet and the scourge of the pirates who had, for far too long, held the airways to ransom.

Too late, the commander of the pirate vessel – one Sydney Strangefellow – saw what lay ahead.

“Put her about, boys!” he croaked, his fear only too obvious to his crew.

“God save us!” screamed one of the men – an optimistic fellow with a high regard for the generosity of his Maker, since he and his shipmates had spent their lives ruthlessly terrorising the high skies. 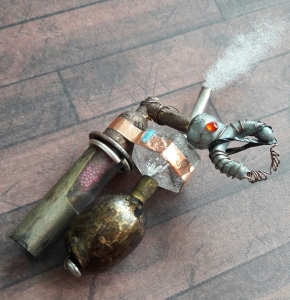 Panic broke out on the vessel and men ran helplessly hither and thither.  They knew – every black-hearted villain of them – that nothing, let alone their old rust-bucket of a ship, could withstand the weapon now fixed of upon them.

There was a flash of turquoise blue as the plasma gun loosed a volley of shots towards the pirate vessel.

The end was quick.  An explosion of blinding white light and then – nothing.  Not so much as a nut or a bolt remained of the incinerated galleon.

A cheer went up from the crew of the Algernaut and a door opened from a cabin below decks.

“Why the cheers?” asked a soft, sweet voice, as Lady Josephine emerged.  “Have you clever boys destroyed another pirate vessel?”

“We have indeed, your ladyship,” smiled the midshipman, bowing his head deferentially.  The Admiral spotted it miles off.  They didn’t stand a chance.” 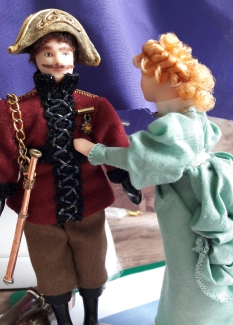 “Well jolly good show,” smiled the lady.  “I’ll go straight away and prepare some tea for all hands.  And I’m sure I can find some particularly delicious cake as well.  You boys certainly deserve it!”

“You spoil us, my dear,” said her husband, who had come below to share the good news with her.

“Not at all,” laughed Josephine.  “Thanks to your splendid invention and your excellent crew, the skies above London have never been so safe.”

“Three cheers for the Hadmiral and ’er ladyship!” barked Edwin Capon, and the crew’s enthusiastic cries could be heard far below, in the city that owed its safety to Algernon Cholmondeley.