It puzzled me… but I enjoy a good puzzle.

I have this pile of vintage clockwork parts, as many of you will know.  Time hasn’t been kind to them, left as they were to rot in an attic for decades. 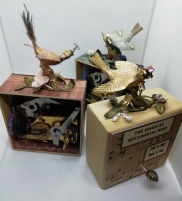 The ones I can clean up and get working are either sold as they are to automaton makers or turned into pretty clockwork twittering birds that sell as fast as I can make them.  The ones that have seized up completely are taken to pieces, the parts being upcycled into our miniature gizmos and contraptions.

But there was this one.  It defied all reason.  The spring had snapped, the rubber bellows had perished, the little band that turned a few cogs in the middle had disintegrated, and yet, when I turned the key, it whirred into life.  I had no idea how parts of it were still working.

It most certainly couldn’t be sold or turned into a singing bird.  I removed the broken bellows and whistle.   Stubbornly, the part that was left continued to function.  Admittedly it was rather primitive, but each time I gave the key a few turns, the brass bit in the middle zoomed around at a rate of knots and the arm which should have moved the bird waved up and down unevenly, controlled by the blue steel cam.  I presume one of the broken parts had once regulated the speed.  The other mechanisms move relatively sedately.  This one, though, buzzed like an insect as it spun around…

…and that gave me an idea.

I hunted in an old box of bracelet charms and found a few dragonflies, a butterfly and a bee.  These were painted in jewel colours and most were stuck to the casing.  Another was threaded on to a length of copper wire and fixed to the wheel in the centre.

Next I turned my attention to the arm.

Arm!  That was when the idea of the Clockwork Entomologist came to mind.  Somewhere I had…  yes… in one of those boxes of junk-I’ll-find-a-use-for-one-day…

There it was – a 12th scale butterfly net!

Constructing a pair of arms and hands from epoxy putty was relatively easy.  One held the net and was molded to the flailing metal arm.  The other held a diminutive magnifying glass, cobbled together with a few bits from the stash.  It fitted neatly into the now empty housing from the bird whistle.  A pair of small black sleeves and cuffs dressed the arms in a suitably formal fashion.  My entomologist might lack all other body parts, but those he had were at least well attired.

The mechanism was housed in a small cardboard box, decorated with an assemblage of suitable images.  A few coffee stirrers were sawn up to make a cover for the spring, so that the sharp, snapped steel edges would be safely covered.

So there it is – my rather inept clockwork bug collecting automaton, swiping ineffectually with his net at the buzzing insect each time the little brass key is turned.

The vintage clockwork mechanisms (in full working order) can be bought from this link at the SteampunkDollsHouse, in case you’d like to try your hand at making an automaton.

The magical mechanical birds are available on Steampunk-Shrunk stalls (see home page for dates and venues) or from this link.

As for The Clockwork Entomologist – I’m not sure that I can part with him at the moment, unless someone makes me an offer I can’t refuse…

2 thoughts on “The Clockwork Entomologist”