Something a little different this week:  Jan Miller, who purchased both Algernon and Josephine Cholmondeley from our Etsy shop, has added a further chapter to the story of their impending visit to Brasston, The Most Cosmopolitan City Award winner in 1850.  Delighted to know that the Lord Admiral of the High Skies and his wife are in such excellent hands.

We hope you will enjoy reading both chapters here:

It was, not surprisingly, young Molly who found the book first.  She’d read her way through everything in the Steampunk-Shrunk library  – even the Suffragette newspapers – and had been on the lookout for something new.

“Excuse me, Lady Cholmondeley,” she said, dropping a pretty curtsy to Josephine, “But do you think your husband, seeing as how he’s the Lord Admiral of the High Fleet, could take me on one of his sky ship machines to Brasston?  They’ve got a perfectly splendid aerodrome and I’m sure they’d allow him to dock there.  Let me show you the pictures.  They’re in colour!”
“Why I’ve never heard of the place, my dear. Are you sure you’ve got the name correct?” smiled Josephine.
“Oh yes, Your Ladyship, Ma’am. I think it must be very famous. It won the ‘Most Cosmopolitan City Award’ in 1850.” 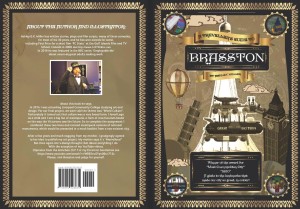 Josephine started to look through the book – a most difficult process since, unlike the inhabitants of Shrunk Towers, this book had not been shrunk to one twelfth of its original size.  She had to obtain assistance from several other members of the community and they in turn became mesmerised by the splendours of Brasston. 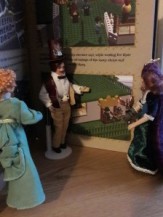 “Good lord!” Barnaby Balsover exclaimed, “There’s a chap there having his shoes polished by a clockwork automaton!  Quite remarkable!”
“Certainly,” agreed Ava Brassfeather, “And it says they do tours of the clock factory and provide cake and tea.”
“I believe it says you have to pay extra for cups and saucers, though, Ma’am,” Molly whispered, jumping in alarm when Ava made a loud tutting sound.
Molly wasn’t sure whether this was aimed at herself or the facilities available at the works, but she didn’t venture to speak again.

When Algernon returned from a successful raid on a troublesome bunch of sky pirates who had been terrorising the airways above Penge, he was met by a mass of pleading faces.
His wife took his arm, gazed alluringly into his eyes and purred, “My dearest…”

“Hmm,” he said finally, once he’d had a strong cup of gunpowder tea and an opportunity to peruse the book.  “I strongly suspect that this is a work of fiction, created by this rather splendid gentleman on the back cover, Mr Ashley G.K. Miller.  I’m not convinced that the city exists.”

“Well if anyone can find it, it’s you, Old Boy,”  announced Lord Horatio Backgammon, and the others joined in a chorus of agreement with his Lordship’s sentiment.

And so, as I write, the entire group is busy packing and preparing for an epic journey in one of the fleet’s most capacious dirigibles, while Algy is earnestly poring over his charts, in search of the city of Brasston. Unfortunately the trip was delayed – but that is another story!

Should you wish to discover this remarkable location for yourself, dear reader, I suggest visiting Mr Miller’s Facebook page, where you will find all the details you need.

After several months, Algernon Cholmondeley, Lord Admiral of the High Fleet, was finally re-united with his dear wife Josephine. He had been captured by Sky Pirates before he could take his friends on the planned trip to Brasston.   Josephine was so relieved to see him again.  But they had been communicating by means of the steam telegraph while he was captive.

It seems the Sky Pirates extracted a large ransom from the Admiralty before releasing Algy unharmed. He, meanwhile, had secretly been inspecting the Sky Pirates remarkable Airships and learning as much as he could about their design.  Of course Algernon was used to high powered airships in his normal day job, but the Sky Pirates had adapted some new ideas from other countries they had plundered.  Algy was now determined to make a new airship of his own.  It would have all the latest technology for the 1850s, including a pigeon-guided location finder.

As his wife and friends were so interested in visiting this Brasston, he could use that trip as an experimental run.

Lady Cholmondely had also been in contact with Mr Ashley G. K. Miller, the author of the esteemed volume; ‘A Traveller’s Guide to Brasston’ which had started the whole thing, and he had sent  pictures of himself on one of his recent Hot Air Balloon Flights.

He said he would be delighted to help them make the Airship and take them to Brasston.

Lady Cholmondeley soon got the local enthusiasts together to collect all the bits and pieces they could find to make the new Airship. Having Algy’s colleagues in the Admiralty look through the old sheds, and with Mr. Miller’s collection of past pieces they had quite a good start.

Josephine and her friend Penelope set to work right away to make a comfortable day-bed for the passengers inside the Airship, while Young Algy played with his own model one. ‘Oh these feathers are going up my nose!’ exclaimed  Josephine.

They were happily employed in this activity while Lord Algernon thought about his new Airship design. More about how he is getting on with it another time!

Jan Miller is a writer and publisher on the conservation of native plants. She also has an interest in miniature plants and crafts.

Lord and Lady Cholmondeley and the Steampunk artifacts were upcycled and made by Jan Stone at Steampunk-Shrunk. Victorian dolls’ house and conservatory with real plants by Jan Miller.

2 thoughts on “A Visit to Brasston – Extended Version”

It takes practice to light them just long enough to get a drip!
Tiny cameras back in stock.
The cameras are slowly coming together. I don't really have the right mindset for mass production, but getting there.
Starting on another batch of tiny tripod cameras.
Orders for these little spell books are flooding in today...
A rather regal and nostalgic look to this young lady.