Up in the dizzy heights of Steampunk-Shrunk Towers, things were getting somewhat overcrowded.  We pride ourselves of being able to upcycle and repurpose just about anything that comes our way, but there are limits. 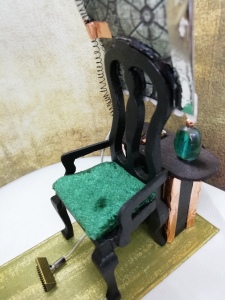 “We’ve repainted and upholstered all these odd dining chairs,” explained Jeremiah, but to be honest, nobody is going to want to buy them.  Everyone wants chairs in sets of four, preferably with a table.”
“I know just what you mean,” replied Charles. “My problem is all these not-quite-working clockwork mechanisms. Take this one, for example. It purrs along beautifully, but the rubber bellows has perished, so there’s no sound. We can’t make a silent songbird automaton, but it’s too good to throw out.”

Young Jasper, Jeremiah’s son, was listening intently.  He started to stroll round the clockwork machine.
“Excuse me, Mister Charles, Sir, but don’t you and Mister Henry make time machines?”
“Yes, Jasper, indeed we do,” Charles smiled.
“And what do they need to make them work?”

Charles laughed. “Perhaps a bit technical for a young nipper like yourself, but basically a valve and piston to build up a huge amount of pressure and a temporal modulator to control the time travel.”

“So if you took out the bird whistle and used its piston in a cylinder to build up the pressure, could you maybe use the arm that should move the bird to do the time modulation?” the boy enquired.

Charles’ jaw dropped open and he stared in amazement at the child.

“‘Cos I’m thinking Mrs S has those working watch faces kicking around somewhere – the ones that wouldn’t fit in our grandfather clocks, and we could let you have one of our spare chairs.  Oh, and I’ve been working on a camera that’s controlled by a foot pedal. I was going to use it to take what I call ‘selfies’, but I’m sure it could be adapted to fit a time machine, so that the time traveller could provide proof of the places visited…  Um…have I said something wrong?”
The boy blushed crimson, as he noticed that quite a crowd had gathered and all were staring at him with the most curious expression.

Charles took a deep breath. “No, Jasper, you have done nothing wrong.  Indeed, you have just had the most stupendous idea.  What a remarkable boy you are!  Would you care to help Henry and I to build the prototype, if your father can spare you, of course?”

Now it was Jeremiah’s turn to blush, as his heart swelled with pride.  “I’d be happy to release my son from his work with me for a while, Charles.  He’s a remarkable lad and I’m sure he’ll learn a great deal from you.”
“And vice versa,” muttered Henry, Charles’ brother and co-inventor.

And so the work began.  Henry tinkered, Charles created the elegant canopy and young Jasper buzzed around making wise suggestions and helping to attach the parts.  Even Henry just stood and scratched his head when the boy suggested installing a plasma screen above the motor, so that the traveller could see the view from the back-facing camera.
“Where do you get your ideas from, young Jasper?” he asked. “Are you sure you haven’t been time-travelling yourself and visiting the future?”
“Don’t know, Sir,” the boy shrugged. “They just sort of pop into my head somehow. Shall I fetch you the plasma screen I was working on last week?  It should fit nicely inside Mister Charles’ canopy there.”

Eventually the machine was finished.  Henry took his place on the velvet-upholstered chair and turned the brass key.  The piston began to pump, while the clock swung around on its steel arm.  Cams and cogs whirred cheerfully.

“There’s room for a little ‘un by my feet, if you can spare him, Coggleford,” Henry called to Jeremiah.

Jasper looked longingly at his father, but the man shook his head.  “Not today, my friend.  There are some things even Jasper is too young for yet awhile.  One day, though.”

“Certainly will, young man,” grinned Henry, as he reached across and started the clock.

The Clockwork Time Machine, with working clockwork motor and quartz clock is for sale at http://www.etsy.com/uk/shop/SteampunkDollsHouse.  Click here or on one of the photos to go to the listing.